CONSUMED is a high-energy free-fall through the twisted inner sanctums of Seattle’s high-tech elite. In the center is Byron Wells, head of Digitron’s Virtual Reality division. He’s brilliant, conniving, filthy rich. . .and out of the picture by the end of Chapter One. She controls him. She repulses him. And like the flames that swallowed both her husbands, she reaches for Les, consuming him.

Enter Les McKee. A divorce attorney who hates divorce, Les is a devoted family man who can’t sweep Byron’s wife from the darkest corner of his heart. While reading on his deck one perfect Sunday, he photographs a magnificent hot air balloon as it prepares to land nearby. Without warning, it explodes in a horrific ball of flames. All on board, including Byron, are killed. 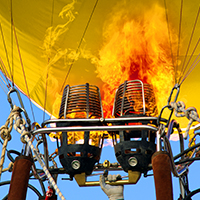 His mysterious client, Beverly, is Byron’s seductive, alluring but soon to be ex-wife. From the time they were college sweethearts, Beverly has been a part of Les’s life, though he chose to tie the knot with her best friend. He handled her gut-wrenching first divorce from a shady nightclub owner who won’t stop haunting him. And now her multi-million dollar second divorce has erupted into a massive murder investigation.

Byron had been grabbing headlines for a year, embroiled in litigation and accused of conspiring to join forces with Akira Nakamura, another defector from the Japanese-based Vortex Video Games. As Les investigates, he’s catapulted into the shark-infested waters of cutting-edge technology. Along the way he finds himself accused of murder. Six men are dead, forty-four million dollars have vanished, an international manhunt is underway and the evidence points to Les.

With each reluctant step, deeper into darkness, Les teeters on the edge of losing his marriage, his career, his life. If only he could know the heart of his enigmatic client. She controls him. She repulses him. And like the flames that swallowed both her husbands, she reaches for Les, consuming him.

TOTALLY CONSUMED. Mike Bugni has written the best legal suspense novel I’ve read. My only grief was that it ended. CONSUMED has more twists and turns than the canyons of California. It reads as if you’re watching a movie. The cliff-hangers will keep you on the edge of your seat. You will feel like you’re there, in the story, watching and hearing every move. You’ll feel sweat dripping as you read. Once I picked it up, it became an extension of my right arm. The attention to detail is amazing and so is the suspense. A superb and pulsating read you will not be able to put down.
Judy B.
MOVE OVER ALL OTHER LAWYER-AUTHORS. The new kid on the block, Bugni, just wrote the best legal mystery I have read in years. I devour them, but this one stopped me in my tracks. I literally could not put it down until I finished it. Perfect combination of scene settings, human emotions and down right perfect good versus evil. I loved the pace, I loved the characters, I felt like I was experiencing it in person. If you love mysteries you will want to own this one.
Theresa S.
WHAT AN EXCELLENT AND WILD RIDE! Plenty of twists to keep you turning the pages until the end. Intelligently written, with plenty of local flavor from the Pacific Northwest. I sincerely hope Michael continues his writing and wouldn’t be at all surprised to see his work compared favorably to Grisham, Coban and Margolin.
K. Feilzer
Best Novel I've Read in Years! Consumed is simply a FANTASTIC read! It grabs you from the first paragraph and never lets you go! Suspense and technology smartly intersect, creating sweat-inducing, palpable entertainment. Can't wait for the sequel and/or the movie! Highly recommend.
Bob M.
I was hooked all the way to the end of this book and wanted more. An amazing first book! Great read!
K. Olsen
A Book You Can't Put Down. OMG. What a thrilling ride Michael Bugni has created. I could not put this book down. I bought the hard copy but had to download it also on my Kindle so I could read it while waiting in court or waiting at stop lights. I can't wait for the sequel. Darn. I didn't want it to end.
S.Fields
A well-written thriller. As a family law attorney, I was interested in this book. Bugni does an excellent job of interweaving real world family law situations with exciting suspense. I read the book in just a few days on vacation, and I had a hard time putting it down. I recommend "Consumed".
J. Shipman
PrevNext

Please read the book and send us a review. We'd like to hear what you think, and we'll post comments here on the site.
info@consumedthebook.com